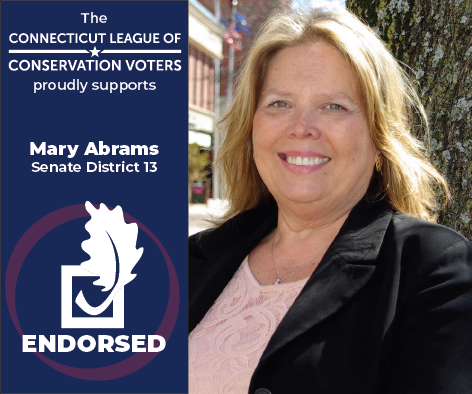 The Connecticut League of Conservation Voters (CTLCV)—a bipartisan organization dedicated to protecting our environment by making it a priority for our elected leaders--endorsed Mary Abrams (D) to represent the 13th Senate District. Abrams is a former school teacher and administrator, and passionate about protecting our environment and leaving the world a better place for her grandchildren and future generations. In contrast to her opponent Len Suzio--who was one of the lowest scoring lawmakers in CTLCV’s 2018 Environmental Scorecard--Abrams expressed strong concerns about exposing our kids to toxic tire mulch on playgrounds and carcinogenic flame retardants in their clothing.

“We can’t gamble with our children’s health, and Mary understands that deeply,” said Lori Brown, CTLCV Executive Director. “While her opponent, Sen. Suzio, worked actively to block bills that would have protected our kids from toxic chemicals, Mary wants to make sure all our children can grow and play without the risk these substances pose. She is smart, thoughtful, and will be a true fighter for common sense and public health in the General Assembly.”
Len Suzio has repeatedly voted against sensible measures to keep our children safe:
Suzio's appalling environmental record landed him on LCV's Dirty Dozen In the States List, which tracks the worst anti-environmental state lawmakers in our country.

Now more than ever, we need leaders committed to our environment. As an educator, Mary Abrams has been an advocate for children's safety and public health for years. She also signed CTLCV's Clean Energy for All pledge, vowing to transition our state to 100% clean energy by 2050.

With the latest reports from the United Nations saying we only have 10 years to cut emissions before climate change causes a catastrophe, it's clear we need lawmakers dedicated to putting our environment and our future first.
To receive CTLCV’s endorsement, candidates must have completed the Survey on the Environment earlier this summer. All candidates running for legislative office were invited to complete the questionnaire, and CTLCV received over 100 responses. Endorsements are issued based on a candidate’s responses as well as additional information provided to CTLCV’s Endorsement Committee.
Paid for by CTLCV PAC. This message was made independent of any candidate or political party. Contributions to the CTLCV PAC of $5,000 or more were made by CTLCV, Inc.; LCV, Inc.; and David Bingham.
CTLCV protects our environment by working with elected leaders to preserve a safe and healthy environment for the public good. | Privacy Policy
© 2008-2021 Connecticut League of Conservation Voters 553 Farmington Avenue, Suite 201, Hartford, CT 06105 | 860.236.5442 | ctlcv@ctlcv.org