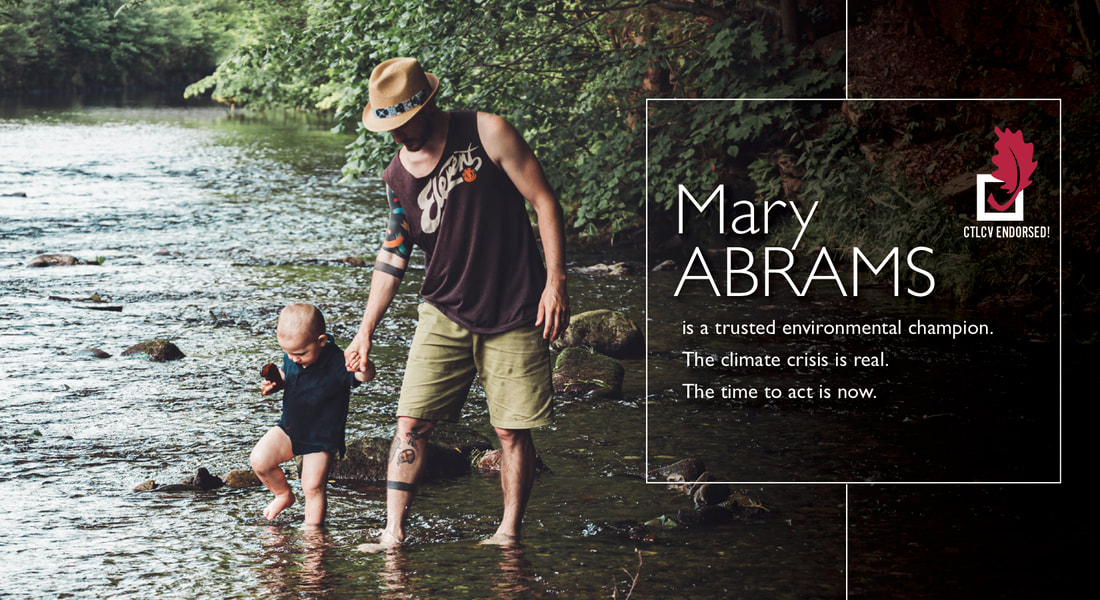 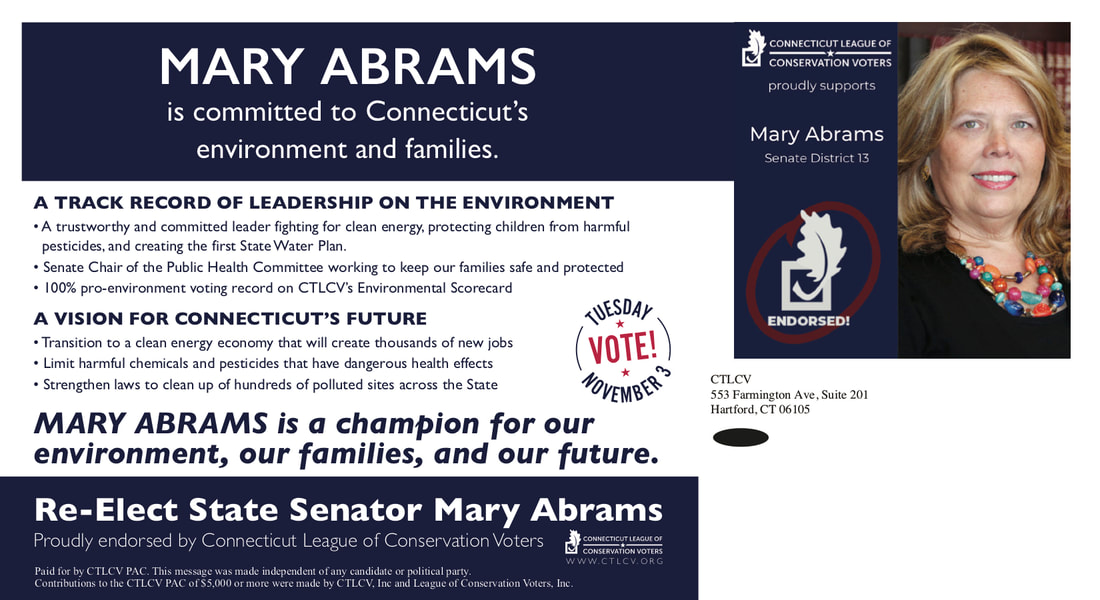 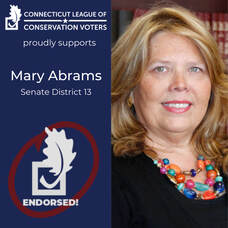 CTLCV ENDORSES MARY DAUGHTERY ABRAMS
​
Hartford, CT – The Connecticut League of Conservation Voters (CTLCV) has endorsed Mary Daugherty Abrams (D) to represent the 13th Senate District. A resident of Meriden and former schoolteacher and administrator, Mary Abrams has represented the District since 2018.
​
CTLCV supported Abrams in her successful bid for election in 2018 because of her pro-environment commitment. In keeping with her promises and the values of her constituents, she earned a perfect 100% rating on CTLCV’s 2019 Environmental Scorecard and was named as one of CTLCV’s Environmental Champions.

As Senate Co-Chair of the Public Health Committee, Mary Abrams has focused on high quality water supply, leading the charge against water contaminants like per- and polyfluoroalkyl substances, known as PFAS. PFAS are known to cause cancer and have been linked to reproductive and immunological effects.  After the disastrous spill of thousands of gallons of PFAS in the Farmington River last summer, Mary Abrams is determined to better regulate PFAS in Connecticut to protect public health and our environment.

Her opponent, whom she defeated in 2018, has repeatedly voted against environmental and public health initiatives, and was listed as one of the national League of Conservation Voter’s 2018 Dirty Dozen, a group of legislators who actively work against environmental legislation. He received the lowest score out of all of the legislators in Connecticut – a horrendous 46% - on the CTLCV 2018 Environmental Scorecard.
In her freshman term, Mary Abrams led the charge on the passage of the State Water Plan, which was designed to balance the use of water to meet the needs of all residents. The State Water Plan reaffirms that water is a resource in the Public Trust to be conserved and benefit the public, not just treated as a corporate asset.

“Mary’s commitment to the State Water Plan exceeded our expectations,” said CTLCV Executive Director Lori Brown. “She was a driving force to get the Plan adopted and we need her in the legislature to create the policies that give the Plan the strength and structure it will need to be a force for environmental protection.

The 13th Senate District, which includes Cheshire, Meriden, Middletown, Middlefield, and Rockfall, faces water quality challenges that could worsen if not addressed.

A complete list of all of the candidates endorsed by CTLCV for the 2020 election can be found on our website. CTLCV.org
​
This information is paid for by the CTLCV Political Action Committee. This message was made independent of any candidate or political party. Contributions to the CTLCV PAC of $5,000 or more were made by CTLCV, Inc. and League of Conservation Voters. Additional information about the CTLCV PAC may be found on the State Elections Enforcement Commission's website (ct.gov/seec).
"Paid for the CT League of Conservation Voters PAC (553 Farmington Ave, Hartford CT 06105) and not authorized by any candidate or candidate's committee."
CTLCV protects our environment by working with elected leaders to preserve a safe and healthy environment for the public good. | Privacy Policy
© 2008-2021 Connecticut League of Conservation Voters 553 Farmington Avenue, Suite 201, Hartford, CT 06105 | 860.236.5442 | ctlcv@ctlcv.org