Located 130 miles southeast of Cape Cod, the Northeast Canyons & Seamounts Marine National Monument is the ONLY marine national monument in the Atlantic Ocean.

This designation ensures the Northeast Canyons and Seamounts will be preserved for future generations by prohibiting any environment-altering activities, like oil drilling.

The entire monument stretches for 4,913 square miles—about the same size as Connecticut—and it supports a unique ecosystem unlike anywhere else in the world. With that unique ecosystem comes a high degree of biodiversity, including many threatened, endangered, and even undiscovered species. 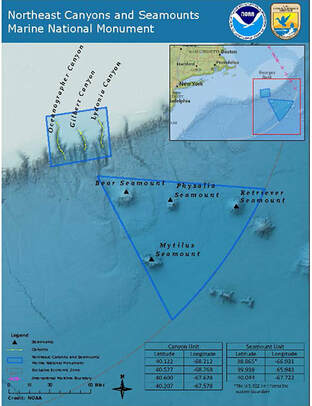 Connecticut's Congressional delegation—led by Senator Richard Blumenthal—championed the effort to protect the Northeast Canyons and Seamounts, and President Barack Obama designated them as a National Marine Monument in 2016. ​

THE EFFECTS OF CLIMATE CHANGE

Climate change is causing our oceans to become warmer and more acidic, and we are still learning just how this impacting the health of ecosystems like the Northeast Canyons and Seamounts.

Congresswoman DeLauro's support was essential to securing Canyons and Seamounts as the first-ever marine national monument in the U.S. Atlantic Ocean. Now we are asking her to secure $500,000 in research funding to study the impacts of climate change on this monument. Click the button below to join CTLCV in this effort.
Add Your Name

The Antiquities Act of 1906 states that once monuments are designated, only Congress has the authority to abolish or modify them according to the Property Clause in the Constitution. Presidents do not have the authority to modify borders or to revoke national monument status.

President Trump has made it clear that he wants to alter any and all national monument status, as he said it was a “massive federal land grab,” and publicly-owned land should be returned back to the states for whatever use they choose, including oil drilling, commercial development, and resource extraction; completely disregarding the fact that these national monuments provide safe habitat for hundreds of species and boost the tourism economy of the states they’re in.