Clean Energy for All 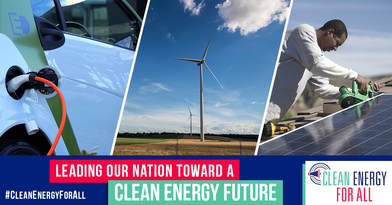 In the absence of federal leadership, and building on a string of clean energy policy wins in states, the Connecticut League of Conservation Voters (CTLCV) is joining with the national League of Conservation Voters and our sister organizations across the nation to double-down on our progress towards a clean energy economy at the state and local level. The Leagues are launching network-wide “Clean Energy for All” campaign to move the country closer to the goal of 100% clean energy by 2050.

From droughts and extreme heat, to flooding, hurricanes, wildfires, and sea level rise, communities across the country are living with the impact of the climate crisis as a result of increased pollution. The 100% Clean Energy Economy Act will transition our economy to 100% clean energy by 2050. In doing so, we can improve public health for communities more impacted by pollution and climate change, ensure an equitable transition for all workers, and invest in family-sustaining jobs in the clean energy economy.

WHO'S FIGHTING FOR CLEAN ENERGY?

CTLCV has been working hard to secure commitments from lawmakers and candidates to join the fight against climate change and move Connecticut towards 100% clean energy by 2050.

In 2018, more than 120 candidates signed our Clean Energy for All Pledge. See if your legislator took the pledge here.

Help CTLCV show lawmakers that we're serious about fighting climate change, cutting carbon emissions, and investing in clean energy. Add your name and be part of this grassroots movement:
With an initial investment of over $2 million, the network of organizations is collectively engaging at the state and local level by:
​
In Connecticut, the national roll out of this campaign coincides with a key set of votes at the State Legislature’s Energy and Technology committee.  With our renewable energy goals lagging behind our neighboring states, Connecticut is at a crossroads as lawmakers consider whether to increase mandates for renewable power and support a shared solar program that would expand equitable access to clean energy. At the same time, advocates are fighting efforts that would weaken critical clean energy programs like net-metering.

“Fighting for clean energy is not new, but at this critical time this campaign represents an ambitious new approach for our family of organizations by unleashing local campaigns across the country that collectively add up to a significant shift to a clean energy economy,” said Gene Karpinski, League of Conservation Voters President.

“The demand for clean energy is going up and the price keeps going down. This campaign is about breaking down the remaining barriers that keep affordable clean energy and pollution-free communities from being accessible to everyone. And it’s about putting the power to make that happen in the hands of voters, instead of polluters,” said Lori Brown, CTLCV Executive Director. “We need the right policies in place to ensure clean energy continues to grow. We must elect climate champions who will prioritize our transition to a 100% clean energy economy.”

According to the League, the transition to clean energy is urgently needed and achievable with existing technology – and it is already underway. Wind and solar now compete and win on costs with outdated fossil fuels and clean energy jobs are significantly outpacing fossil fuel jobs.   If these trends continue, clean energy has the opportunity to be a major driver of employment in every city, state, and region.
The campaign will be engaged throughout the 30 states with a conservation voter organization presence, with each state engaged in its own local, state or regional effort.

The Conservation Voter Movement is a unique network of 30 state organizations and one federal organization that closely collaborate and share expertise and resources in order to effect positive change at all levels of government.

More information can also be found on the Clean Energy section under our Issues.
Transitioning to clean energy will avert the worst impacts of climate change while creating good jobs, boosting our economy, saving consumers money, and protecting our health.
Across the U.S. over 50 cities, more than five counties and one state, have already adopted ambitious 100% clean energy goals.

Volkswagen (VW) cheated federal emissions tests and polluted the air we breathe with toxins emitted by diesel vehicles. These toxins increase respiratory illnesses like asthma and speed up the rate of climate change.  VW is on the hook for $14.7 billion dollars for putting profits over people. Governors have the opportunity to reinvest the Volkswagen Environmental Mitigation Trust in our communities, especially low-income and communities of color where students and families are most at risk of breathing dirty air and disproportionately carry the burden of pollution. By using these funds to take dirty diesel buses off our roads and replace them with clean electric buses we can protect our most vulnerable. Governors decide how the VW settlement funds are invested and states can use up to $2.7 billion for electric school buses.

Our electric bus campaign asks that governors reinvest the VW dollars in our communities and school districts. The League movement is especially focused on bringing these dollars to low-income and communities of color where students and families are most at risk of breathing dirty air and disproportionately carry the burden of pollution. That way, our states can take dirty diesel buses off our roads and replace them with clean electric buses, protecting our most vulnerable.

Cleaner: Switching a vehicle from diesel to electric power can reduce a vehicle’s CO2 emissions by 71%.

Cheaper to Run: Switching from a diesel bus to an electric bus can reduce the fueling costs of a vehicle by over 40%.

Great Performance: Electric buses have proven their performance in all types of terrain and weather.