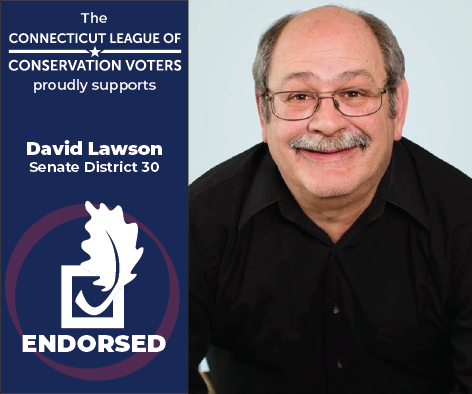 The Connecticut League of Conservation Voters (CTLCV)—a bipartisan organization dedicated to protecting our environment by making it a priority for our elected leaders—endorsed David Lawson (D) to represent the 30th Senate District. Lawson is the current Chair of the New Milford Board of Education, and has worked closely with local land trusts and other groups to preserve open space. His commitment to clean water and air stands in sharp contrast to his opponent, Sen. Craig Miner, who actively worked to weaken environmental protections and used his position as Chair of the Environment Committee to block key bills from even being considered. Miner has an abysmal 54% Lifetime Score in CTLCV’s 2018 Environmental Scorecard, a clear indication that he does not prioritize the environment or public health.

“David knows that protecting our open space and clean air and water is critical to making sure our rural communities - and whole state - thrive,” said Lori Brown, CTLCV Executive Director. “While his opponent, Sen. Miner, has worked hard to block critical protections for our air, water, wildlife, and more, David is committed to making sure our kids and communities can enjoy our natural resources for many years to come. He knows that investing in clean energy will create new, exciting jobs - especially in the Northwest Corner - while also helping us fight climate change. We need leaders like David who won’t bow down to special interests or big polluters like his opponent.”
Craig Miner's lifetime of voting against the environment and for big polluters has landed him on CTLCV's Dirty Dozen in the States.
To receive CTLCV’s endorsement, candidates must have completed the Survey on the Environment earlier this summer. All candidates running for legislative office were invited to complete the questionnaire, and CTLCV received over 100 responses. Endorsements are issued based on a candidate’s responses as well as additional information provided to CTLCV’s Endorsement Committee.
Paid for by CTLCV PAC. This message was made independent of any candidate or political party. Contributions to the CTLCV PAC of $5,000 or more were made by CTLCV, Inc.; LCV, Inc.; and David Bingham.
Privacy Policy
© 2008-2022 Connecticut League of Conservation Voters 553 Farmington Avenue, Suite 201, Hartford, CT 06105 | 860.236.5442 | ctlcv@ctlcv.org