Modeled after LCV Victory Fund’s federal “Dirty Dozen,” the “Dirty Dozen in the States” contains some of the worst offenders in the nation when it comes to undermining protections for clean water, carbon emissions, public health, and more. Members of the "Dirty Dozen in the States" have consistently sided against the environment and—regardless of party affiliation—are running in races in which an LCV state affiliate has a serious chance to affect the outcome.

​In the last election cycles, CTLCV has named two legislators to the Dirty Dozen.

Suzio’s campaign website implies that he supports Connecticut’s environment, even listing his 100 percent score on the CTLCV Environmental Scorecard in 2011. But Suzio’s voting record sunk to a failing 46 percent in 2018—the lowest score of any state senator. Defeating Suzio could flip the chamber to a pro-environment majority.

From 2001 to 2018, Craig Miner has taken the anti-environmental position on more than 85 important environmental bills in the Connecticut legislature. The bills have been compiled into the following table. To view the table, please click here or on the image below. 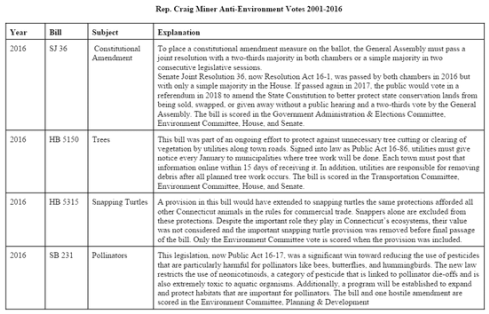 This information is paid for by the CTLCV Political Action Committee. This message was made independent of any candidate or political party. Contributions to the CTLCV PAC of $5,000 or more were made by CTLCV, Inc., LCV, Inc., and David Bingham. Additional information about the CTLCV PAC may be found on the State Elections Enforcement Commission's website (ct.gov/seec).
CTLCV protects our environment by working with elected leaders to preserve a safe and healthy environment for the public good. | Privacy Policy
© 2008-2021 Connecticut League of Conservation Voters 553 Farmington Avenue, Suite 201, Hartford, CT 06105 | 860.236.5442 | ctlcv@ctlcv.org