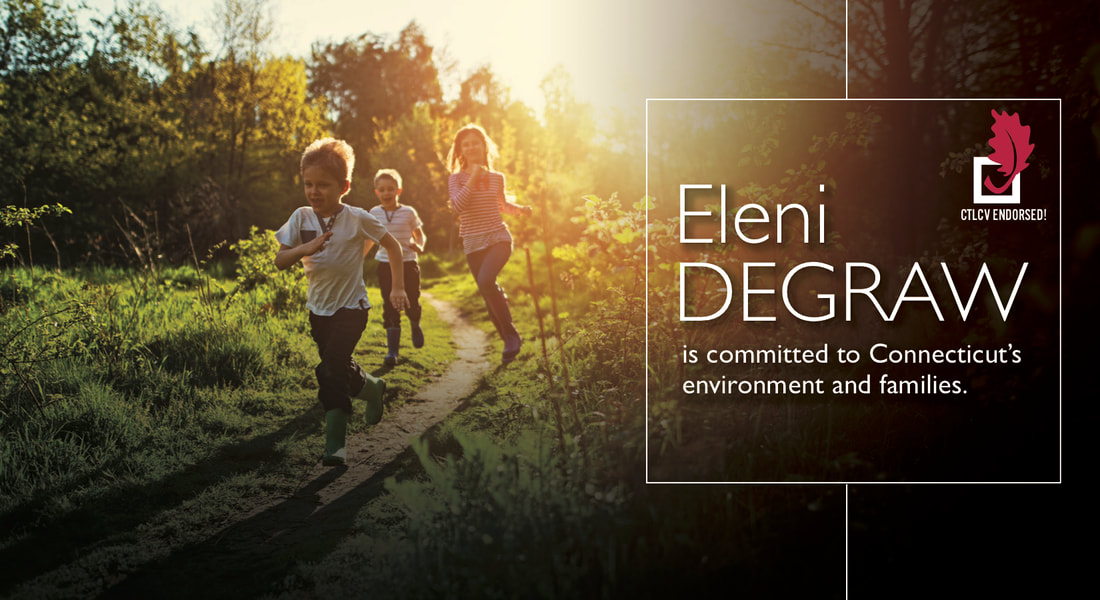 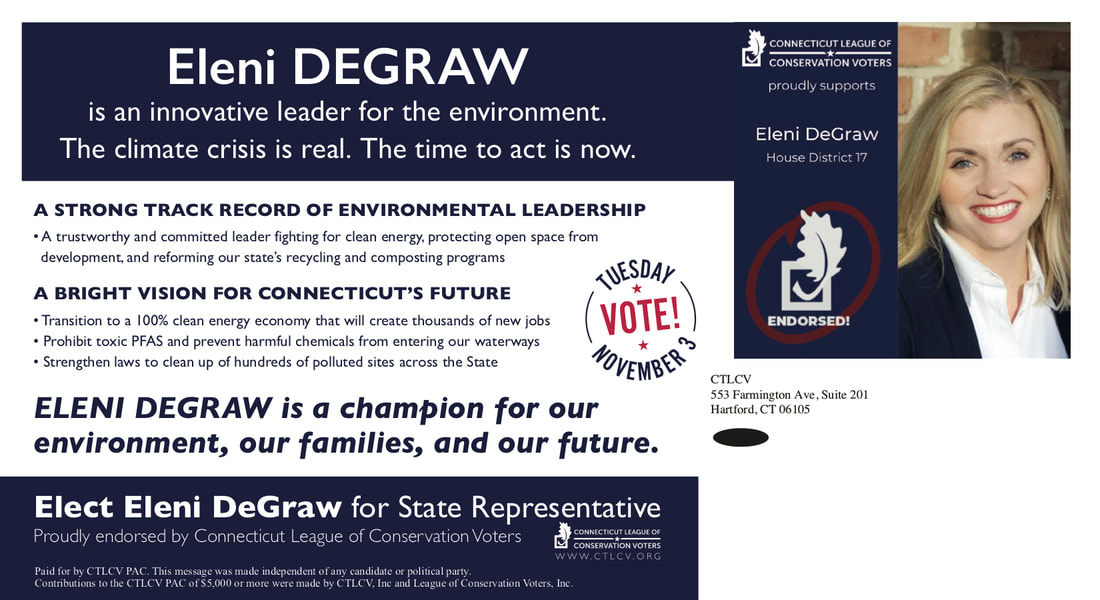 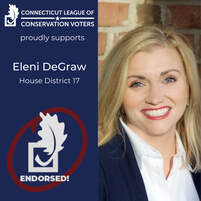 Hartford, CT – The Connecticut League of Conservation Voters (CTLCV) has endorsed Eleni Kavros DeGraw to represent the 17th House District that includes Avon and Canton. She has a long history of civic engagement through local non-profits aimed at improving the lives of residents.
​
Eleni DeGraw has shown fierce commitment to providing local resources to residents who want to learn more about electric cars, composting, gardening, and toxic chemicals that threaten waterways. She has been very vocal in response to the June 2019 Farmington River PFAS spill, when thousands of gallons of the toxic chemical threatened Canton residents’ safety. Eleni DeGraw will prioritize banning PFAS and other toxins from entering waterways.

“Eleni DeGraw has been incredibly involved at the local level, but also sees the big picture for our State, which is exactly what we want in a State Representative,” said CTLCV Executive Director Lori Brown. “We want a candidate who will listen to the residents that they represent and work to protect their families from toxins and pollutants.”

“The residents of Avon and Canton deserve a stronger leader on these issues to represent them in Hartford, and Eleni DeGraw is that person,” said Brown.

CTLCV endorsements are based on candidates’ track records on key environmental issues, their responses to a Survey on the Environment, and an extensive interview via Zoom. CTLCV is a bipartisan, statewide, non-profit organization dedicated to protecting Connecticut's environment by making it a priority for our elected leaders. We work in concert with Connecticut's environmental advocacy groups to identify and highlight important bills impacting our air, water, wildlife, open space, climate, and our health, and hold legislators accountable for their votes in our annual Environmental Scorecard.
A complete list of all of the candidates endorsed by CTLCV for the 2020 election can be found on our website.
CTLCV.org
​
This information is paid for by the CTLCV Political Action Committee. This message was made independent of any candidate or political party. Contributions to the CTLCV PAC of $5,000 or more were made by CTLCV, Inc. and League of Conservation Voters. Additional information about the CTLCV PAC may be found on the State Elections Enforcement Commission's website (ct.gov/seec).
"Paid for the CT League of Conservation Voters PAC (553 Farmington Ave, Hartford CT 06105) and not authorized by any candidate or candidate's committee."
CTLCV protects our environment by working with elected leaders to preserve a safe and healthy environment for the public good. | Privacy Policy
© 2008-2021 Connecticut League of Conservation Voters 553 Farmington Avenue, Suite 201, Hartford, CT 06105 | 860.236.5442 | ctlcv@ctlcv.org