The States are Leading the Charge:
Connecticut Fights for a Green Future

For decades, environmental advocates have fought to protect our environment and drive the nation toward a sustainable economy. We have met many successes, from restricting HCFC refrigerants to establishing large swaths of protected green spaces. Today, many of these accomplishments are under siege by the federal government, and it is becoming increasingly difficult to create new opportunities in clean energy and sustainability.

With the Trump Administration undermining longstanding environmental protections, scaling back investments in renewable energies, and suppressing research into climate change, advocates are calling on states like Connecticut to lead the charge in the fight for a sustainable future. It’s up to the states to adopt legislation to cut greenhouse gas emissions, invest in clean and efficient energy technologies, and protect our air, earth and water.
Moving to 100 percent clean energy is the cornerstone of any plan to stop climate change, and it involves more than just building an offshore wind farm or putting up solar panels. A truly green economy would also promote equity, lower emissions, invest in energy infrastructure, support resiliency efforts, and be accountable to the public.

Fighting climate change is not just a win for the environment, but also a win for our economy. We have seen time and again that when we invest in efficiency or clean energy or resiliency, we create new jobs while also lowering remissions. Take our existing “Lead By Example” program. Its aim is to cut our state’s energy use by 40 percent by converting state buildings, highway lights, and other assets to greener alternatives. This creates green collar jobs and strengthens our economy while also shrinking our carbon footprint.

Investments in public and electric transit also reduce emissions while growing our workforce and making it easier for residents to commute to school and work. Transportation is one of the key contributors to greenhouse gases, and combating climate change requires a multiform approach that builds infrastructure for electric vehicles, electrifies our state fleet, and increases mass transit options. 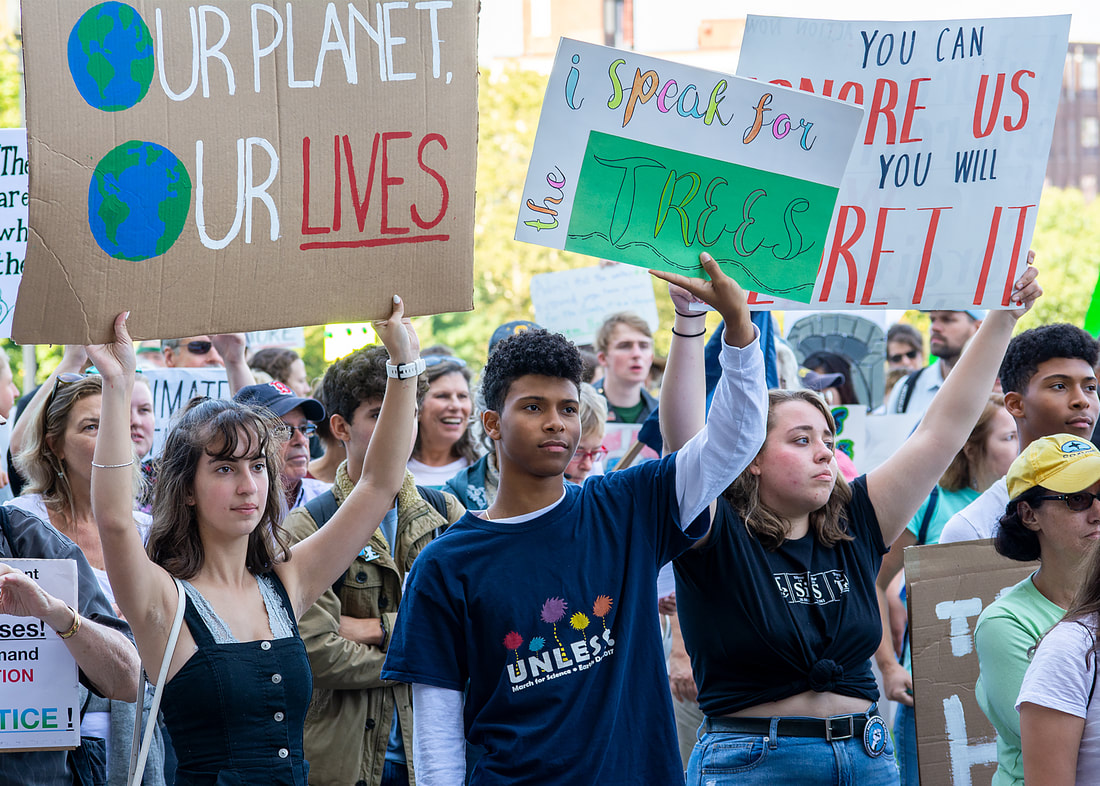 Protesters at the Youth Climate Strike in Hartford demand action from our leaders.
Connecticut has started down this path, and we are in good company. We’re joining a movement that includes California, New York, Massachusetts, Maryland, and others to stand up to the Trump Administration’s rollbacks and promote new clean energy and environmental policies. We have joined the effort to fight the rollback of California’s emission standards—which also apply here in Connecticut. These tighter standards on auto emissions protect our public health from toxic fumes and help us reduce the impact of transportation on climate change. They have been adopted by five automakers, thirteen other states, and Washington, DC—but they still fell under attack. It’s clear that states not only have to adopt their own climate policies, but fight to defend them.

Here in Connecticut, Governor Lamont and the state legislature have taken strong first steps toward protecting our environment and creating a sustainable future. By investing in a 2,000 MW new offshore wind facility, committing to a zero-carbon electric grid, reducing our reliance on single-use plastics, electrifying our state fleet, and reducing our state’s carbon emissions, Connecticut is building a green future and is setting a national example for environmental policy.

In his first year, Governor Lamont has emerged as an environmental champion by including environmental and community advocates on his Transition Team, moving key environmental bills forward during the most recent legislative session, and expanding the role of the Governor’s Council on Climate Change. Under his leadership, we have seen incredible support for Connecticut’s environmental future, and new attention directed toward upgrading our power grid, investing in coastal resiliency, and growing our clean energy portfolio.
We need leaders like Governor Lamont to keep Connecticut’s environmental agenda moving forward even in the face of the destructive policies and rollbacks currently taking place at the federal level. We are proud that Connecticut has joined alongside other environmentally conscious states to fight federal decisions like the rollback of the Endangered Species Act and revocation of the California Emissions standards in the courts.
However, Connecticut’s commitment to a green future can’t stop at these steps. Nations around the world are already experiencing the impacts of climate change. Here in Connecticut, we have seen more erratic weather, increased mosquito populations, outbreaks of infectious diseases like EEE and West Nile, and a decline in the health of our critical wetlands and endangered species. We need to fully commit to a green future by investing in green-collar jobs, addressing environmental equality, and divesting from carbon fuels.

People have a right to clean air, earth and water, and even an environmentally conscious state like Connecticut has more work to do. For example, right now Connecticut is increasing our investment in natural gas with the Killingly Energy Center. How does it make sense to set the goal of a zero-carbon Connecticut while simultaneously investing in carbon-producing energy?

Simultaneously, there is still a lot of work to be done to address environmental inequality and our inefficient energy grid. Low-income families are at the highest risk to experience the impact of climate change through greater exposure to pollutants, proximity to industrial facilities, and exposure to environmental catastrophes like hurricanes, drought and wildfires. We need real policies to help the ensure the most vulnerable among us are not left behind in the green economy we want to build. This means increased funding for energy efficiency to help low-income households lower their energy bills while also reducing emissions. It means revamping our environmental justice law to give marginalized communities a voice in the environmental policies that will affect their neighborhoods. It means making sure we provide job training and educational resources to those who need it the most.

While we invest in the future, Connecticut cannot ignore the damage climate change has already done. We cannot grow a green economy while rising seas threaten our coastline and toxic emissions poison our air. We must invest in resiliency programs, conservation, and open space. Our woodlands are natural carbon sinks, soaking up harmful greenhouse gases. Supporting the Natural Heritage Trust Program and the Open Space and Watershed Matching Grants would go a long way towards shrinking our carbon footprint.

It’s time to fully commit to a green future, and Connecticut has the technology, leadership and knowledge to get there. Under the Lamont administration, we already have made incredible strides in the right direction. From all of the environmental advocates, we are grateful for those important steps, and we support Connecticut as they fight the current federal administration for a cleaner planet. The people of Connecticut have spoken, and will keep speaking: the time to fight for a green future is now.

Clean energy is at the heart of our work to lower emissions and roll back the clock on our climate crisis. You can learn more about clean energy in general on our Clean Energy Issue Page. There you can find more information on the types of clean energy at use in our state as well as some of the latest news.

You can also sign our Clean Energy for All Pledge to vote for candidates who support transitioning to 100% clean, renewable energy by 2050 or sooner. In 2018, we collected similar pledges from Connecticut candidates and lawmakers, including Gov. Lamont. This pledge was at the heart of many clean energy commitments and laws passed this year, and with 2020 just around the corner, we're doubling our efforts to make our leaders make fighting climate change their top priority!
CTLCV protects our environment by working with elected leaders to preserve a safe and healthy environment for the public good. | Privacy Policy
© 2008-2021 Connecticut League of Conservation Voters 553 Farmington Avenue, Suite 201, Hartford, CT 06105 | 860.236.5442 | ctlcv@ctlcv.org