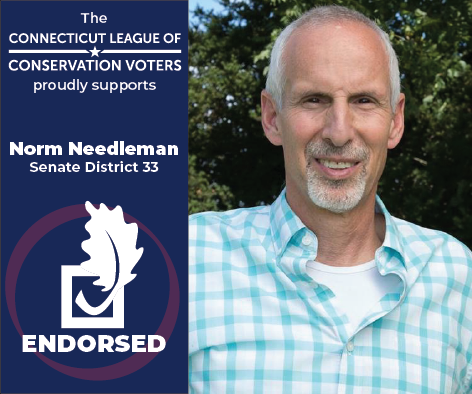 The Connecticut League of Conservation Voters (CTLCV)—a bipartisan nonprofit organization dedicated to protecting our environment by making it a priority for our elected leaders— endorsed Norm Needleman (D) to represent the 33rd Senate District. Needleman is currently serving his fourth term as First Selectman in Essex, where he has been a thoughtful leader on environmental issues. He has taken a strong stance about the importance of combating climate change and investing in clean energy to grow our economy.

“Norm knows that investing in clean energy means creating good, high-paying jobs for Connecticut families,” said Lori Brown, CTLCV Executive Director. “He understands that climate change is one of the most critical challenges facing our generation, and that investing in renewable energy won’t just cut emissions, it will also grow the green workforce. In Essex, Norm has shown a commitment to transparency, bipartisanship, and his community. We need more leaders like Norm at the State Capitol who will give complex issues the thought they require, leaders who will do the right thing, not the easy thing.”
Norm's opponent, State Rep. Melissa Ziobron, has an appalling track record on the environment. In 2018, Ziobron took pro-environmental votes just 62% of the time according to CTLCV’s 2018 Environmental Scorecard. She voted against:


When it comes to the environment, Ziobron has been in lockstep with lawmakers like Len Suzio and Craig Miner, both of whom ended up on LCV's Dirty Dozen in the States list, which tracks the worst anti-environment state legislators in the nation.

We can't afford to risk our environment and our future with Ziobron in the State Senate. Norm Needleman is committed to protecting the values and priorities we share. He signed our Clean Energy for All pledge, vowing to move Connecticut to 100% clean energy by 2050 or sooner.

With the latest report from the United Nations saying we only have 10 years to cut emissions and act on climate change before catastrophe strikes, it's clear we need leaders like Norm who are ready to invest in clean energy, creating jobs and shrinking our carbon footprint.
To receive CTLCV’s endorsement, candidates must have completed the Survey on the Environment earlier this summer. All candidates running for legislative office were invited to complete the questionnaire, and CTLCV received over 100 responses. Endorsements are issued based on a candidate’s responses as well as additional information provided to CTLCV’s Endorsement Committee.
Paid for by CTLCV PAC. This message was made independent of any candidate or political party. Contributions to the CTLCV PAC of $5,000 or more were made by CTLCV, Inc.; LCV, Inc.; and David Bingham.
CTLCV protects our environment by working with elected leaders to preserve a safe and healthy environment for the public good. | Privacy Policy
© 2008-2021 Connecticut League of Conservation Voters 553 Farmington Avenue, Suite 201, Hartford, CT 06105 | 860.236.5442 | ctlcv@ctlcv.org