There has never been a more important election for our environment. CTLCV has been working around the clock to promote candidates who will be champions for our clean air and water, who will lead the fight against climate change, and who will build a brighter future for us all.

In addition to our endorsements, we have been active on the ground and across the internet to get crucial information to voters about where their candidates stand on the environment. Here are some of our efforts:

Hartford, CT – The Connecticut League of Conservation Voters (CTLCV) has endorsed 65 candidates for the Connecticut General Assembly House and Senate 2020 election. CTLCV has never endorsed this many candidates in any previous election and has identified champions in all 8 counties across the state.

The growth of CTLCV endorsements indicates that the environment is no longer a marginal concern for Connecticut residents and lawmakers. The CTLCV-endorsed candidates are hugely committed to tackling climate change, investing in clean energy, improving recycling programs, and protecting open spaces.

Candidates seeking CTLCV’s endorsements were asked about top environmental priorities for 2021 if elected or re-elected.  Their responses to specific questions are posted on CTLCV’s website, which include expanding the Bottle Bill, achieving 100% Zero Emission Electric Grid by 2040, regulating pesticides, overhauling our waste and recycling programs, investing in clean energy, tackling climate change in significant and equitable ways, strengthening Environmental Justice laws, protecting forests and urban parks, and banning PFAS and other toxic chemicals that pollute our water and endanger our health.

“The environment has long been seen as a sideline issue, but the 65 CTLCV endorsements in 2020 show that legislators and their constituents understand the link between environmental issues and the economy, public health, and Connecticut’s potential to be a leader in the growing national rise to mitigate climate change,” said CTLCV Executive Director Lori Brown. “These endorsements are a clear signal to voters that they have a choice to elect people that share their environmental values, and will act on them”

These CTLCV-endorsed candidates are comprised of both incumbents and non-incumbents who have demonstrated a commitment to advancing environmental legislation in the State. CTLCV does not endorse in every race, but CTLCV endorsements show voters in many districts which candidates are most committed to championing environmental priorities. These candidates have proven that they care about the health of residents and the environment, are committed to creating significant and positive change for environmental justice and will proactively vote to make Connecticut a leader in a clean energy future.

“We have been thrilled to interview so many candidates that recognize the importance of the environment to Connecticut’s future health and economic sustainability. We found them to be highly educated on the substance and complexity of issues, and all of them will prioritize the environment if elected,” said David Bingham, CTLCV Co-chair.   “These candidates are enthusiastic to get started and we’ll be at the Capitol to support them.”

All candidates seeking CTLCV’s endorsement must first complete a Survey on the Environment, which highlights issues that will likely be addressed in the 2021 Legislative Session. CTLCV researches candidates and selectively interviews before the full board votes to issue an endorsement.

“These priorities directly affect every resident of Connecticut,” said Brown. “In so many ways, 2020 has shown us how linked we are to each other and to the natural world. Our health matters. Open space and clean air matter. Climate change is an increasing threat, and these candidates have a vision for Connecticut that prioritize these concerns.”

CTLCV is a bipartisan, statewide, non-profit organization in its 20th year of working with lawmakers to help inform their positions and track their votes.  Unlike most environmental organizations, CTLCV can hold lawmakers accountable with an annual Environmental Scorecard and can endorse candidates during an election.

A complete list of candidates endorsed by CTLCV for the 2020 election can be found on our website. For additional information regarding specific candidates, contact Executive Director Lori Brown or Communications Director Lindsy Floyd.

This information is paid for by the CTLCV Political Action Committee. This message was made independent of any candidate or political party. Contributions to the CTLCV PAC of $5,000 or more were made by CTLCV, Inc. and League of Conservation Voters. Additional information about the CTLCV PAC may be found on the State Elections Enforcement Commission's website (ct.gov/seec).

In addition to cutting edge digital campaigns, CTLCV also invested in targeted mail pieces for eight key Candidates. Each mail series informs voters where their candidates stand on the environment. 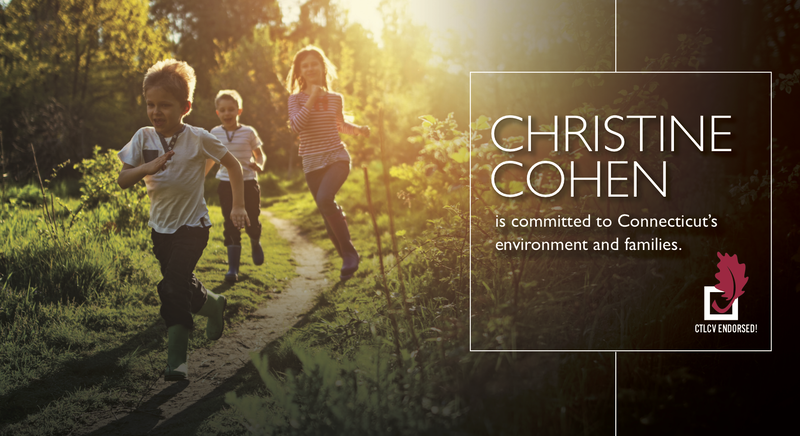 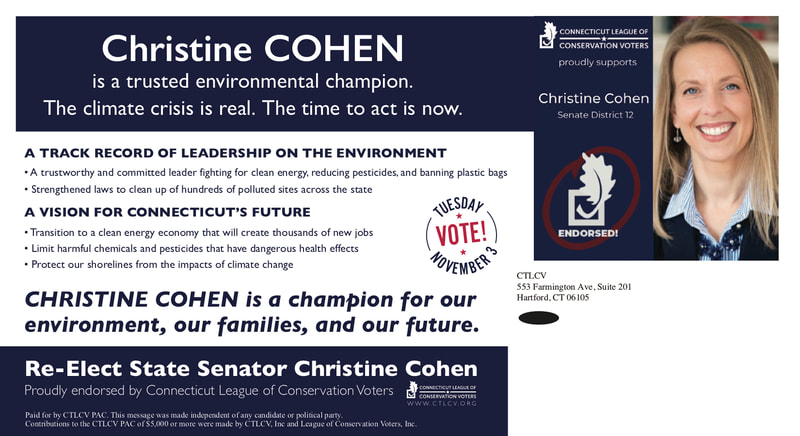 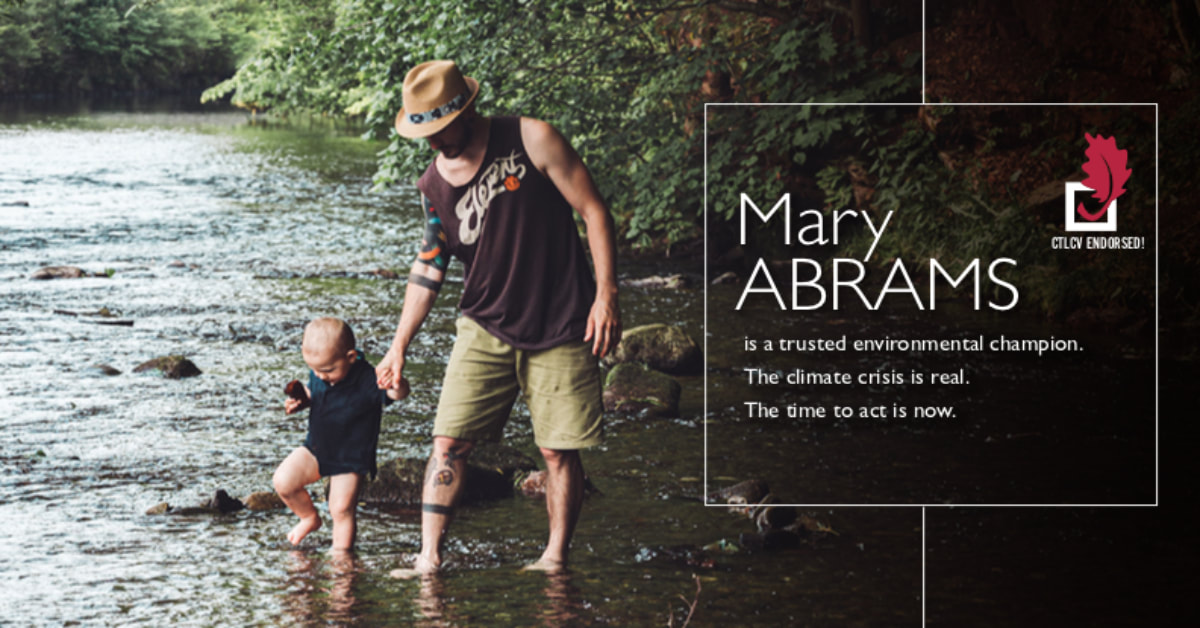 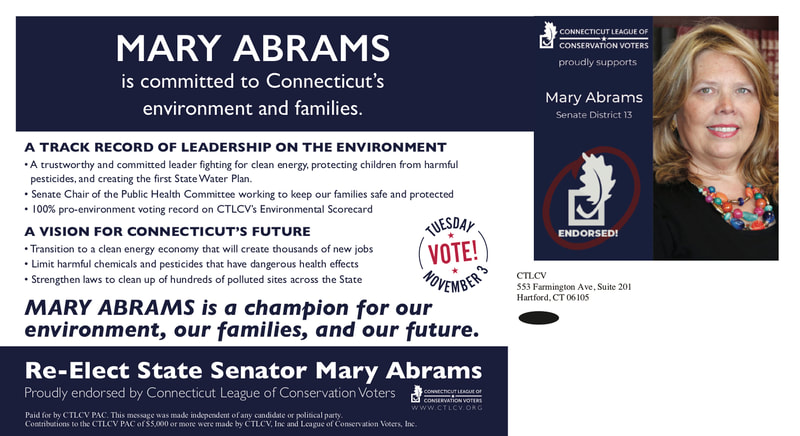 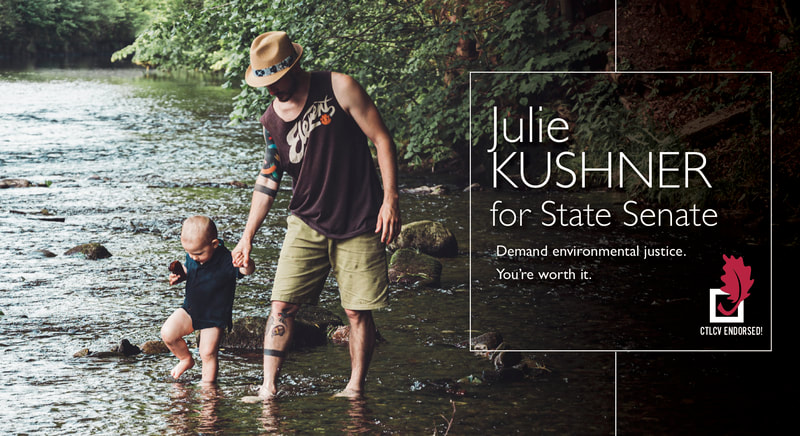 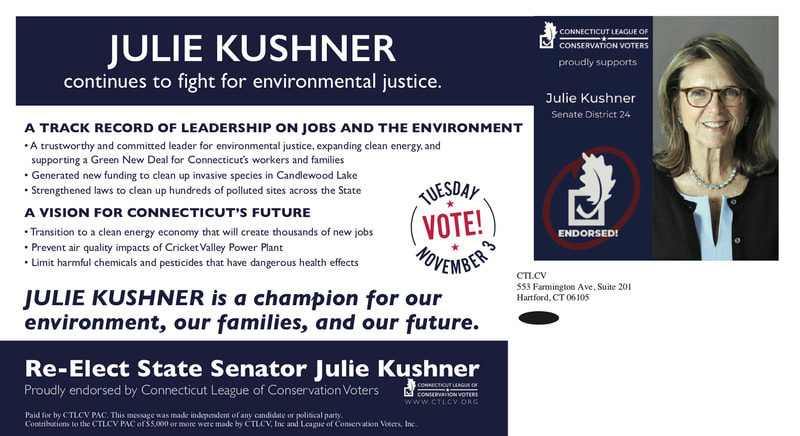 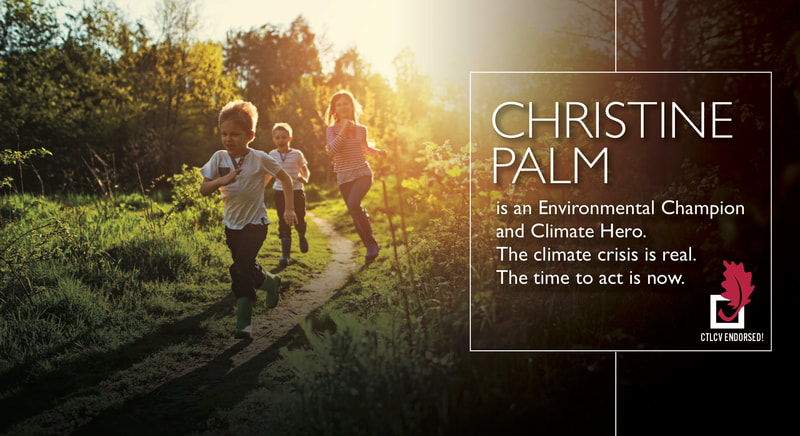 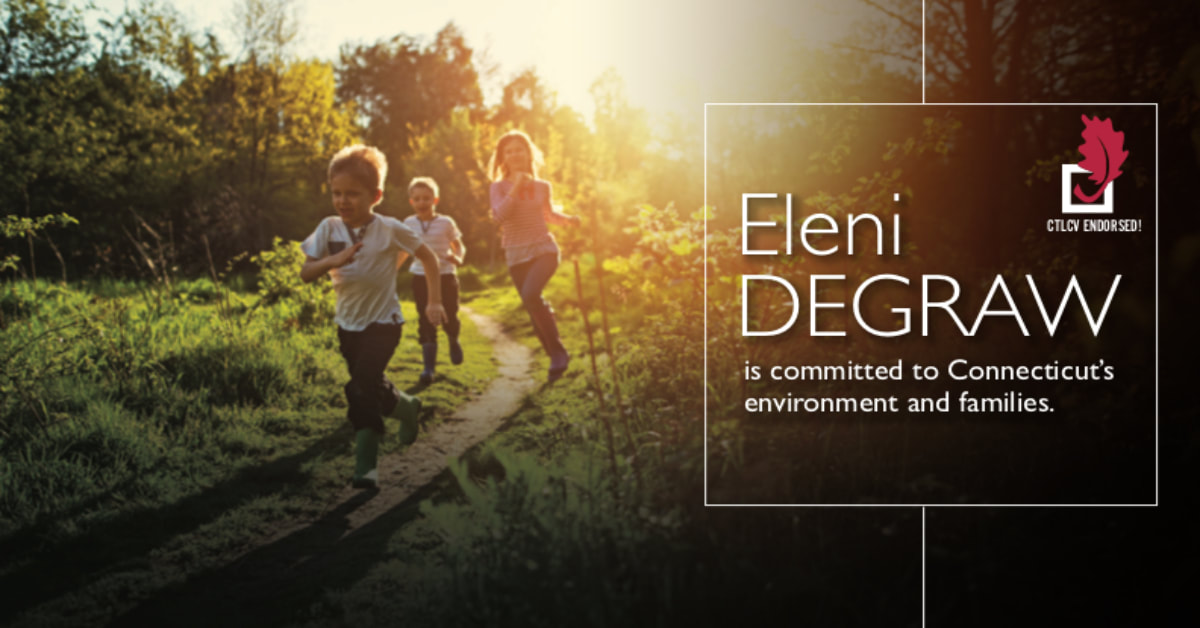 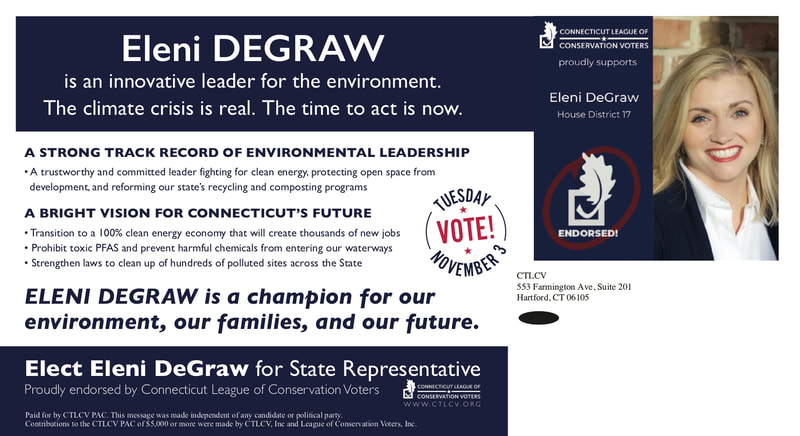 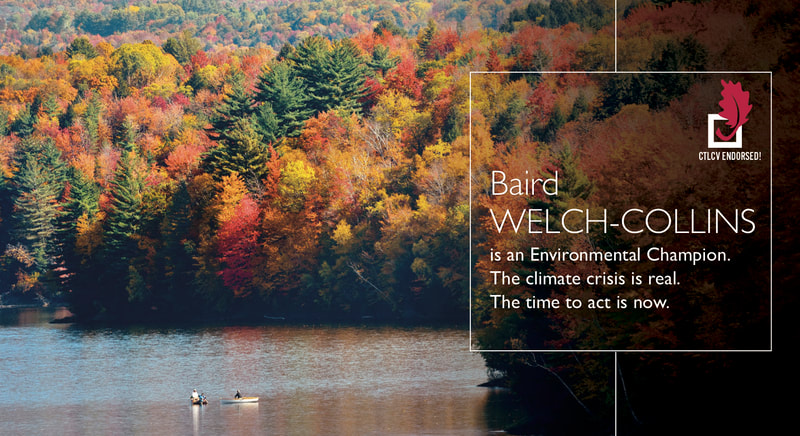 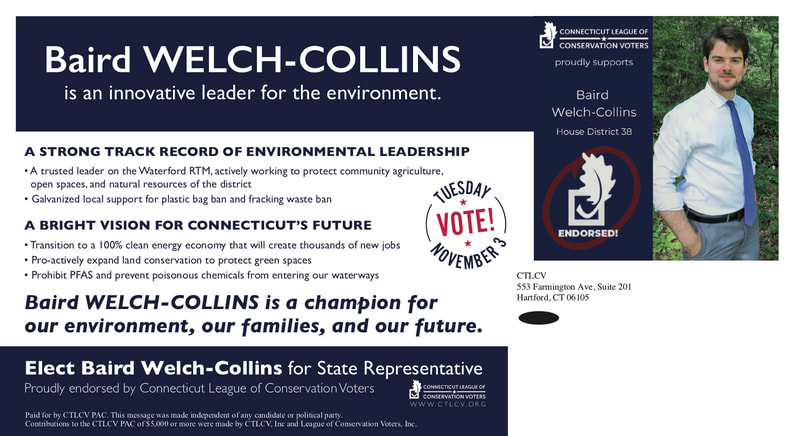 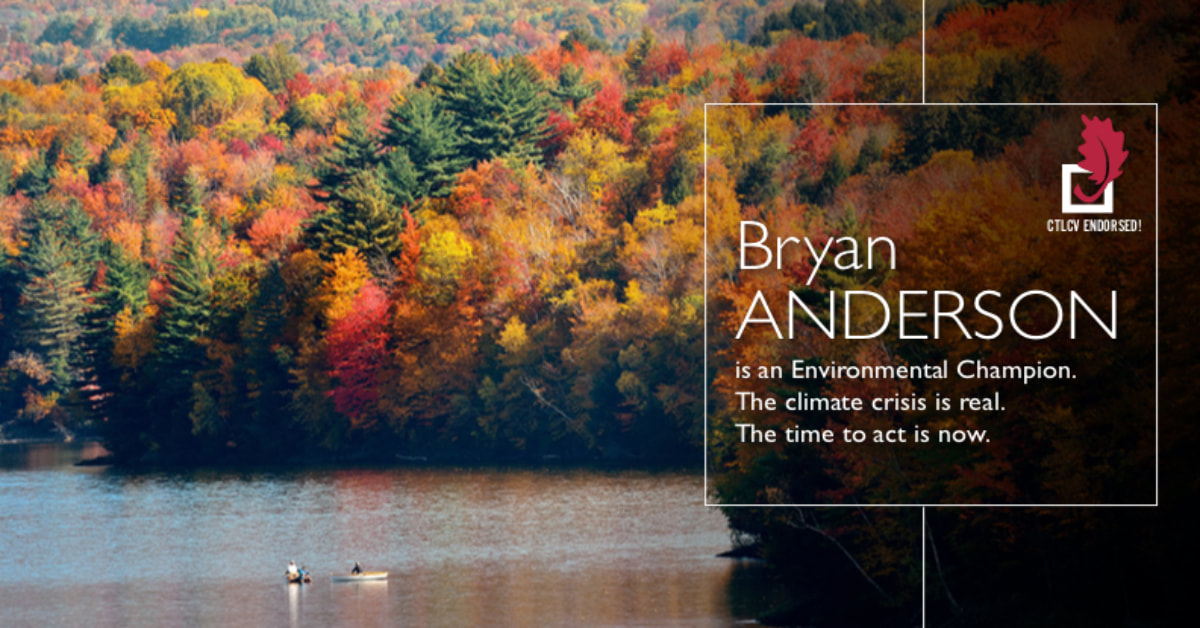 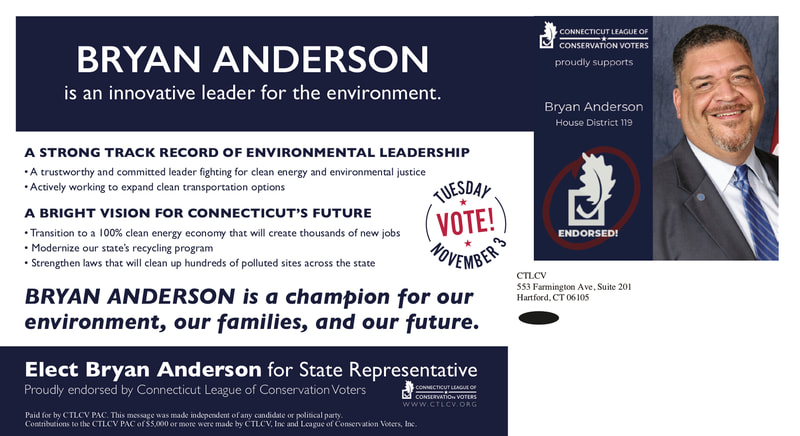 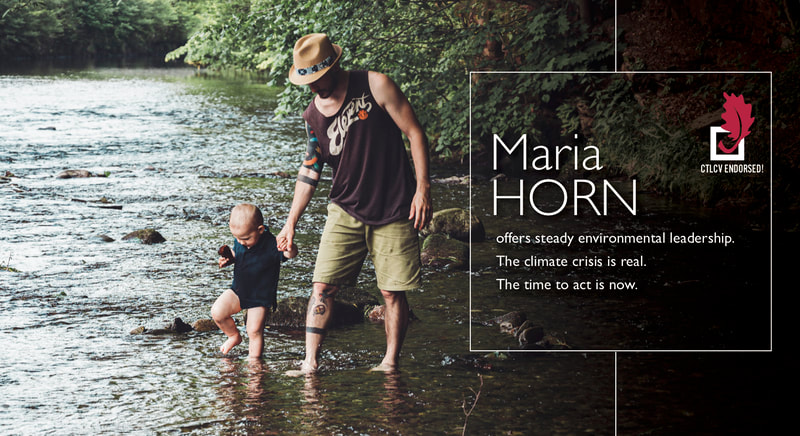 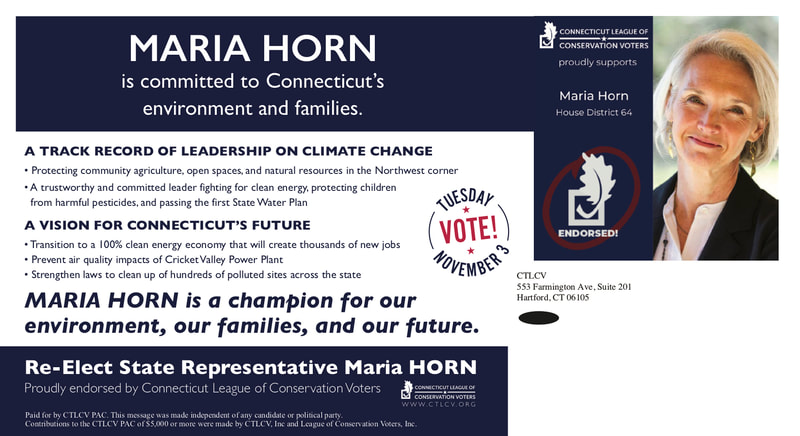 In order to reach more people in key districts and across the state, CTLCV has been running an aggressive advertising campaign. You may have seen some of our ads on your computer, tablet, or phone: 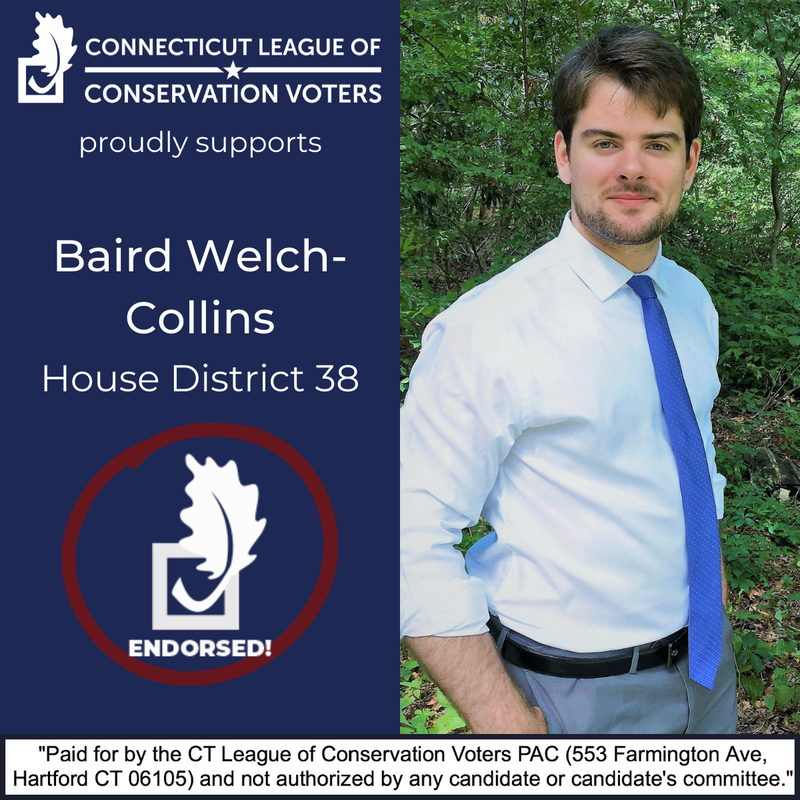 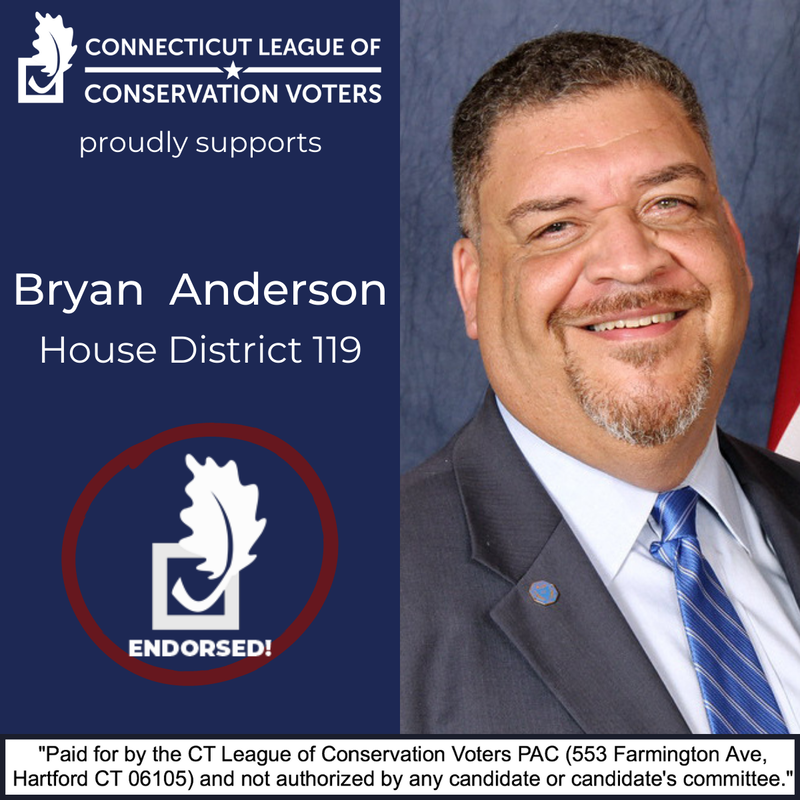 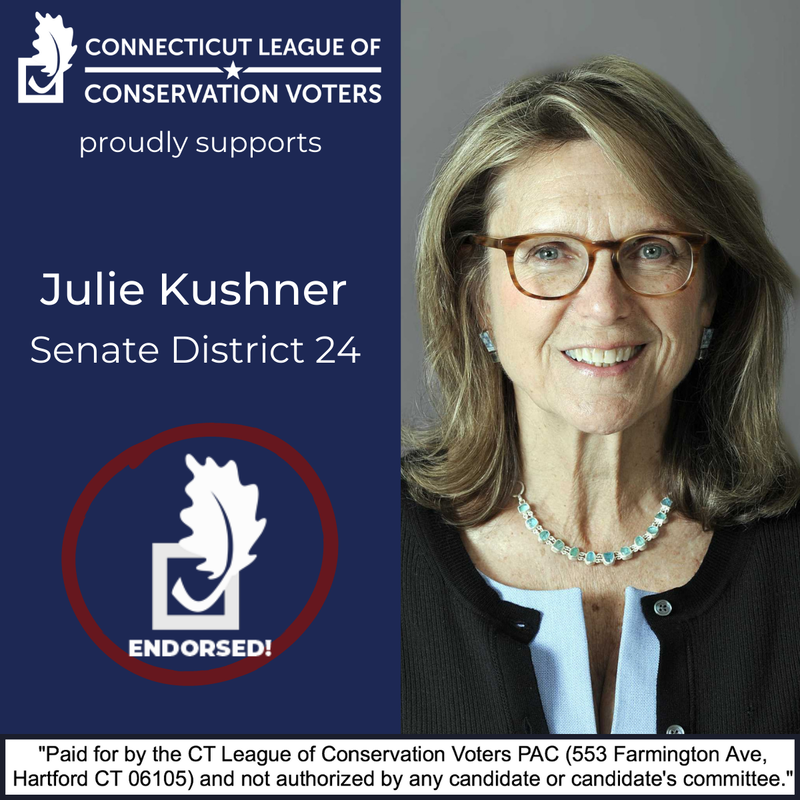 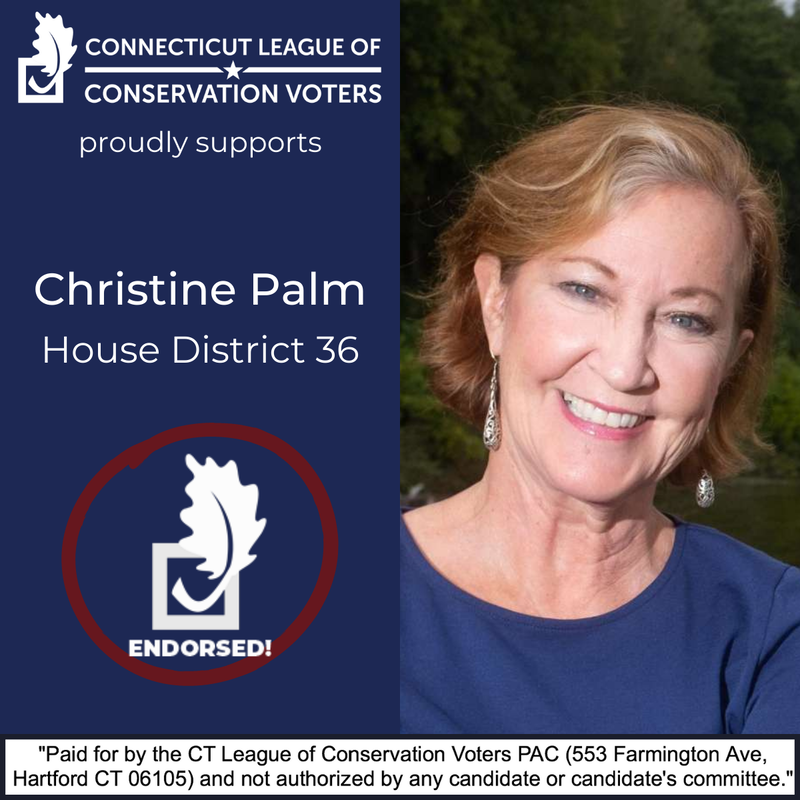 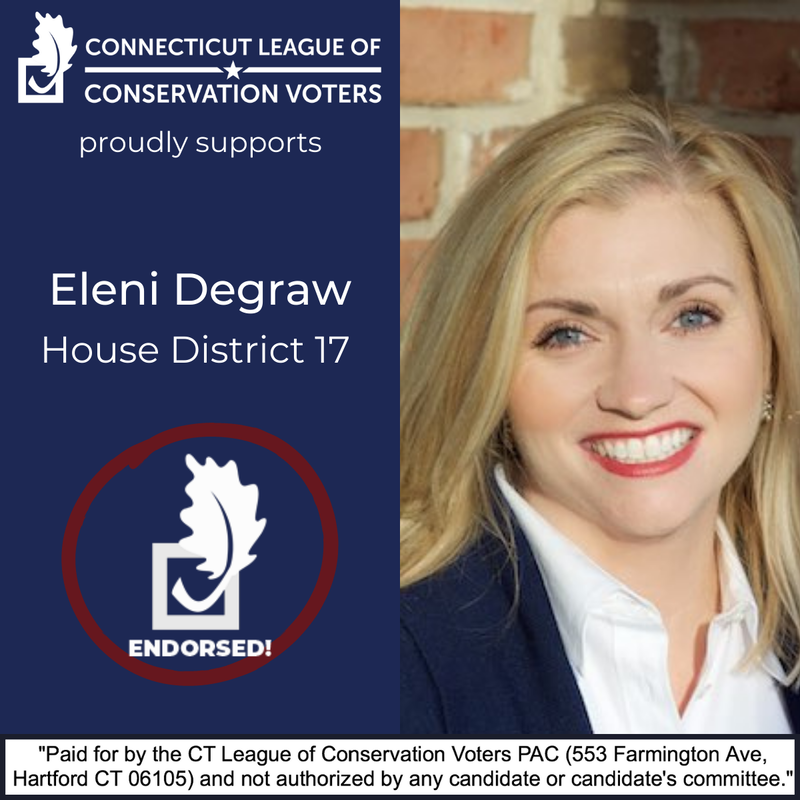 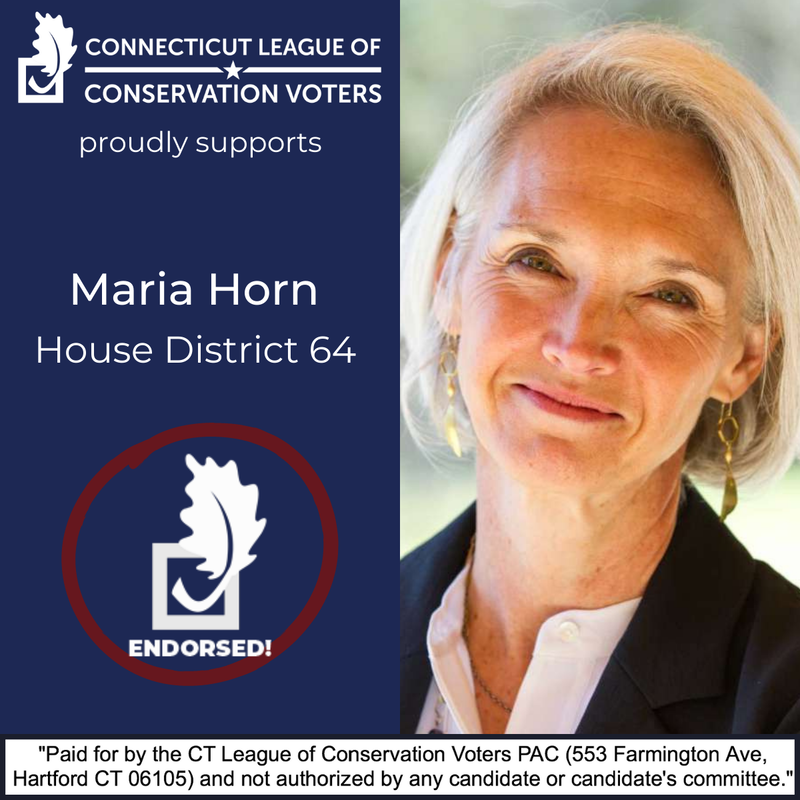 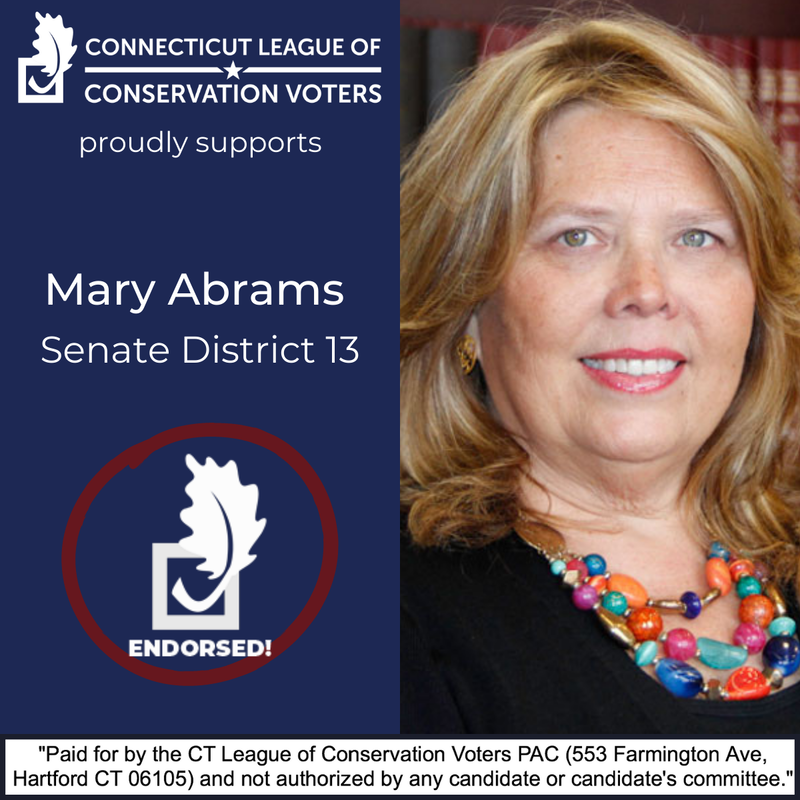 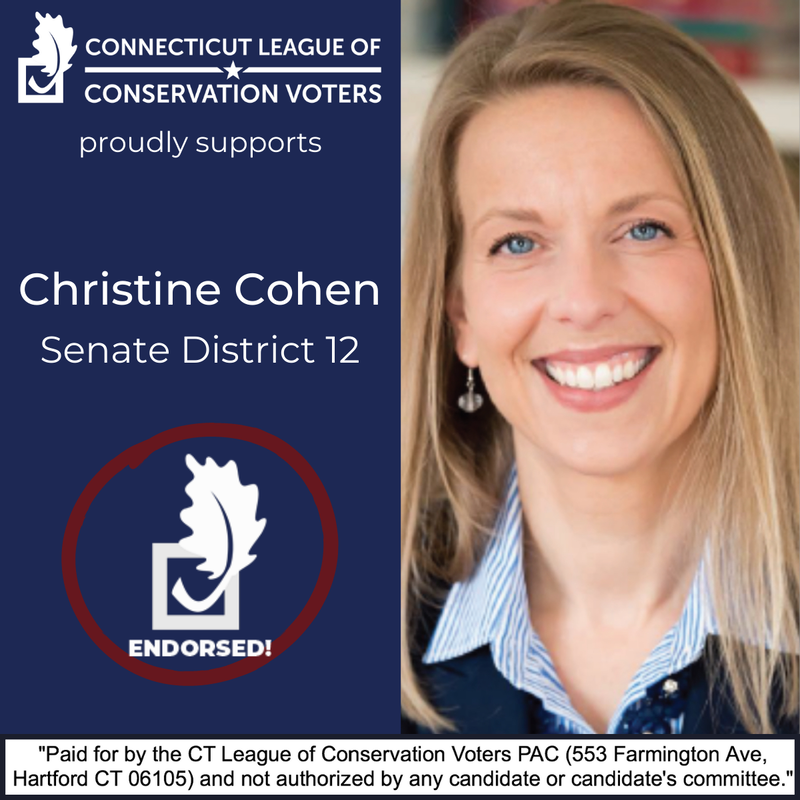